From Wikipedia, the free encyclopedia

John Calvin Maxwell (born February 20, 1947) is an American author, speaker, and pastor who has written many books, primarily focusing on leadership. Titles include The 21 Irrefutable Laws of Leadership and The 21 Indispensable Qualities of a Leader. His books have sold millions of copies, with some on the New York Times Best Seller List.[1][2]

Maxwell was born in Garden City, Michigan in 1947.[3] An evangelical Christian, he followed his father into the ministry. He completed a bachelor’s degree at Circleville Bible College in 1969, a Master of Divinity degree at Azusa Pacific University, and a Doctor of Ministry degree at Fuller Theological Seminary. He currently resides in South Florida with his wife, Margaret. He is an ordained minister in the Wesleyan Church. 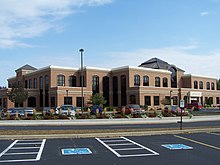 Since the 1970s, Maxwell has led churches in Indiana, Ohio, California, and Florida.[4] After serving as a senior pastor for 14 years, he left Skyline Church in 1995. In 2004 Maxwell returned to congregational ministry at Christ Fellowship in Palm Beach Gardens, Florida, where he is currently a teaching pastor. On November 16, 2008, he began serving as a guest pastor at Crystal Cathedral in Orange County, California. His mentor, Robert H. Schuller, had a variety of noted evangelical pastors preach at his megachurch after his son, Robert A. Schuller, resigned as senior pastor in 2008. Maxwell returned to preach at the Crystal Cathedral several times and his messages were shown on the Hour of Power television program.

Maxwell is a leadership expert, speaker, and author.[5] He founded INJOY, Maximum Impact, The John Maxwell Team, ISS and EQUIP. EQUIP is an international leadership development organization working to help leaders,[3] involved with leaders from more than 80 nations. Its mission is “to see effective Christian leaders fulfill the Great Commission in every nation”.[6]

Maxwell speaks annually to Fortune 500 companies, international government leaders, and organizations as diverse as the United States Military Academy at West Point and the National Football League.[citation needed] A New York Times, Wall Street Journal, and Business Week best-selling author, he was one of 25 authors named to Amazon.com‘s 10th Anniversary Hall of Fame.[citation needed] Three of his books, The 21 Irrefutable Laws of Leadership, Developing the Leader Within You, and 21 Indispensable Qualities of a Leader, have each sold over a million copies.[7]

In 2007 Maxwell was inducted into Omicron Delta Kappa at Concordia University Irvine. Maxwell has a building named after him and his family at Indiana Wesleyan University, the Maxwell Center for Business and Leadership, as a result of his influence on the Wesleyan Church, the owner of the university. In 2015, he was inducted into the IWU Society of World Changers, where he was honored with an honorary doctorate degree.[8]

In May 2014, Maxwell was named the No. 1 leadership and management expert in the world by Inc. Magazine.[5]

In July 2013, Maxwell’s organization trained 24,000 leaders in Guatemala. Several “John Maxwell Team” members took part in the week-long leadership training sessions.[12] In March 2022, Maxwell visited a Christian “Conference for Life and the Family” in Guatemala-City,[13] supported by Guatemala’s president, Alejandro Giammattei. During a meeting with employers, he praised Guatemalan Attorney General, Maria Consuelo Porras,[14] calling her “a rockstar” and a “leader of leaders”.

The Art of Manliness